It’s Friday, so it must be time for the #WeekendDesignChallenge! Our inaugural #WeekendGameJam was a huge success - thanks to everyone who contributed and voted for their favourite.

This week the challenge is to create an app that celebrates a country or a culture that you have an interest in. Let’s take a look at a few examples:

You could create something like this in Thunkable with:

YouKnow is a concept app for lovers of Indonesian handicrafts and arts. According to its designer:

The targets of this application are traditional craftsmen, local handicrafts communities, Indonesian people and global community. “YouKnow” application is supposed to be able to introduce Indonesian cultures to the world and make improvement to Indonesian economy.

You could create an app like this in Thunkable by using:

India Story was developed by Avantika Khanna when she was just 17 years old.

According to the developer:

India Story handholds tourists through their journey of exploration of a city, using interactive audio guides to ensure that all those that travel in India feel the touch of its magic. Join us at India Story as we travel in time and conserve Indian culture and heritage.

You could recreate something like this in Thunkable using:

There a tons of beautiful apps in this category that you can use for inspiration or, of course, you can try coming up with something entirely of your own design.

Looking forward to seeing all the fantastic ideas you come up with!

Bánh Mì Near Me by @tatiang

The World of Heritage by @tchind

Our next challenge will be a #WeekendGameJam check out the full roster here:

Really hope that everyone has been enjoying the #wdc as much as we have. One thing I’m keen to avoid as much as possible is the weekly challenges becoming “chore” or folks feeling like they have to participate in every single one. With that in mind we’re trialling a new tri-weekly schedule for the next few challenges to give you better visibility and choice around how you spend your time in the Community. Broadly speaking, we’ll rotate between an app (re)design challenge, …

I can’t participate in this WDC but I look forward to seeing other people’s apps all the same.

No worries at all - we’ve posted a list here with all the weekend challenges for the next 6 weeks so that you can plan around your own schedule.

Can I do something on python or Javascript and integrate it with thunkable??

@codeemaker as long as you have a /projectPage/ link or a published web app that you can share at the end then I don’t see why not?

So, I was in more of a games than an information sort of mood. And my app had to involve poodles, while pretending to stick with the theme, travel and culture. So… without further ado, I present you with an early draft of Poodle Doodles Travel Agency.

The game is functional, but the closing screen is almost absent (instead of being a cute postcard from the poodle to her family…), and I’m not totally happy with layout/theming on the main screen. (I wanted it to work on both a small phone, the web, and a tablet. That was a big challenge.) And directions are probably marginal.

Monday update: Directions improved. Started working on a closing screen that displays a postcard with results. Layout is hard. Still working on it.

What an interesting approach! I went the information way, but looking to add some fun stuff after seeing yours. Hope you don’t mind!

the best idea i could come up with was an app to track places visited and after toying with the idea i realized i was building a bucket list tracker in the guise of a tourist app. so i said, why not make it generic so it could track places visited AND any other list to keep track of.

i’m embarassed to submit it as an entry because it is so simple and it has only these 4 functions:

the datasource is one google sheet workbook but constructed to allow any number of lists to track.
the first screen shows the available lists being tracked - currently it shows two places_to_visit trackers but it could have been showing addional lists of books to read, foods to taste, etc. by simply editing the google sheet. the 2nd list shows the items that belong in the tracker list selected. clicking on an entry leads to screen 3 - for updating an item as having been DONE (it also serves as a toggle for un-doing what has been marked DONE before).

it requires a google sheet (with name of buckmast ) and here’s a public link to my version.

So next time you’re visiting Toragbat or Corhum, make sure you have this app with you!

Bánh Mì Near Me

Web App demo (limited functionality – Yelp API and YouTube playback via Web Viewer do not work in a browser):
https://thunkable.site/w/VukDhec94 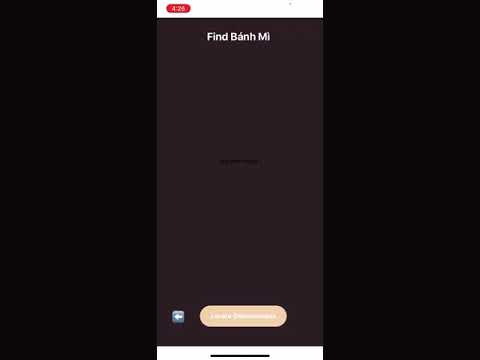 I think this is a great WDC theme but I was a little overwhelmed thinking about how to make something for it. It feels like something that would take me a while to create.

But what popped into my mind was… food! I’ve been on kind of a mission to find the best Bánh Mì sandwich in the SF Bay Area. Bánh Mì are Vietnamese sandwiches. I’ve so far sampled about a dozen restaurants’ faire.

And I realize that what I’ve created here is just a limited version of Yelp but… once in a while it’s good to be able to narrow the focus and just create an app for me.

And the beauty of this approach, which is API based, is that by changing one text string from “Bánh Mì” to anything else (“steak”, “dessert”, “vegan, etc.”), I could instantly have an app that focuses on another type of cuisine. Here’s the exact same app but with “hot fudge sundae” replacing “Bánh Mì”:

Cultural caveats:
I realize that food in of itself does not represent a culture holistically and also that this particular food is born from colonialization. So focusing on it is potentially problematic. The video I included in the app does go into that history briefly.

Hello everyone,
So here is my entry …its called he World of Heritage…It shows you state by state culture, tourism and history … try attempting the quiz! For certification send a screenshot of your result to us!

Built use DnD on Thunkable X.

Nice work, @tchind. You really shouldn’t post your real name, photo, school name and where you live on the Internet. Please consider replacing the screenshot above to remove/hide those details.

Please check with your teachers and parents and follow their advice on this!

@tatiang I love your idea! The UI is great too.

Here’s my submission, OUTLINE INDIA.
Most of us miss travelling during COVID, so, this is a game about travelling through India virtually!

Great app and nice design. The find Button did not work for me but the info screen works. The theme is great. I was even tricked by the back arrow in the screen thinking that it’s part of Wikipedia site.

Cool app. Two pieces of feedback, if you wanted to develop it further.

Oops, 3 pieces of feedback:
What does the listviewer at the top of the app do?

Hey, thanks for the feedback! Such stuff os really helpful.

That’s a great idea! Will implement it immediately.

Could you add images? I’d love to /see/ where I’m travelling to. There are lots of free images that you could include - I’ve found that Wikimedia Commons (Wikimedia Commons) is a good place to look for images that are Creative Commons licensed and can be included in an app.

Another great idea! Images would really be helpful for people who haven’t been there.

What does the listviewer at the top of the app do?

Ah, that’s a DVL, not a list-viewer. I used it because I was planning on adding images anyway, and it would be easier to connect images of the city with the name if I used a DVL. I’m using it to display the itinerary for your travels. I’ll add a label there. Again, thanks for all the feedback!