Hi everyone,
I have a question that I’m hoping someone has a good solution for. I’ve got a web_viewer that I use to record and upload videos. The problem that I have is that when the current view is closed/switched in the app the upload stops. My workaround was to put all of my “screens” on one screen. This allows the web_viewer to upload in the background without being closed out, but it also causes one very large screen and slows down the responsiveness.

Does anyone else have another solution for this possibly?

I’ve got a web_viewer that I use to record

I didn’t know the web viewer could record videos - are you using WebRTC or something fancy like that?

As far as I know there’s no straightforward way to do this. The only thing I could think of is getting users to wait until the video is uploaded before moving on, but by the sounds of it this isn’t what you’re looking for?

I’m using the service addpipe.com. It’s pretty slick and works well for my application. I just have to build the entire app (other than the login and loading screens) in one page so that I can just hide the webviewer rather than close it out while it’s uploading. That way it has the effect of uploading in the background.

It would be a nice feature upgrade to allow us to run some background processes and/or webviewer in the background when a page is closed so that I don’t have to program the whole thing in one page. Putting everything one one page has some advantages, namely I don’t have to copy functions between screens, but it’s also got some downsides. The downsides are mostly the increased complexity, I have to build my own navigation, and responsiveness takes some of a hit.

Thanks @athornock - do you want to add an explanation of what you’d like to see to the #feedback section.

I’d image that the number of people who wound use this -vs- the amount of work required to design and develop this probably wouldn’t be worth our while, but at least if it’s on the list someone will take a look and we might even be able to come up with a work-around?

Were you still wanting some help with addpipe?

Hey Aaron! Actually, I’d love that. I started building using the native recorder because I just couldn’t get to addpipe to work. My last effort stalled when I would click “record” and the loading icon would appear but the recorder never worked (I suspect this was related to Flash?).
Any chance you can share how you implemented addpipe and why you use it over the native recorder?

I generated a web page that I host on S3. I then call the web page in a web viewer and pass url variables to the page.

Using the response block I get data back from the web viewer.

Here’s a simplified version of my web page code (make sure to put your own account hash and eid in):

Thanks for the help and sharing some of your hard work! Awesome stuff.

Were you able to get more than a few seconds to record and upload with the thunkable video recorder?

Just tested with a 37 second video uploaded to Cloudinary and it worked well! Hope that helps.

I haven’t been successful doing that. I get a network error if I try to upload more than a few seconds. Can you show me your blocks? 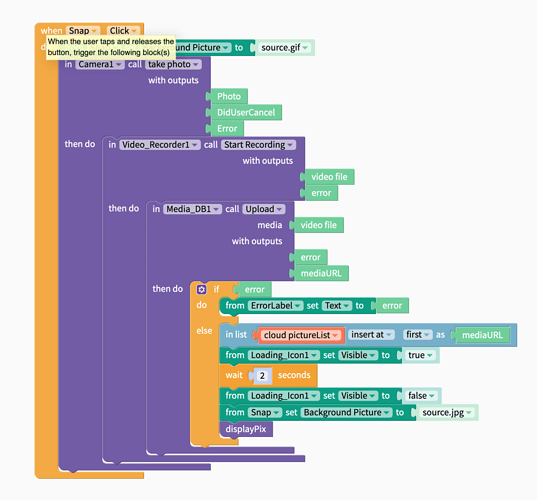 Why do you call the camera first?

The camera blocks are borrowed from SnapGram because they work

I added the video recorder bit because I wanted to see if when I tap a photo, I can get it to send me to the corresponding video. That’s working - though I want to play with the upload logic a bit more.

Does that work on iOS. Feels like webRTC is blocked unless you’re in safari.

It’s worked for me from the test downloads, but I don’t have it on the app store yet.

I am attempting to use jitsi webRTC protocol and I get an error. No error if I launch the page in safari tho.

Can we deep link to safari specifically?

If not, this is where the ability to copy text as an onclick.event would come in really handy.

I do have to pre-authorize the camera using the camera component and bringing it up to take a photo. This is part of my registration process so it authorizes it for everyone. Could that be your issue?

I don’t know about linking to safari.

pre-authorize the camera using the camera component and bringing it up to take a photo. This is part of my registration process so it authorizes it for everyone. Could that be your issue?

ahhha! that could be the issue! I’ll keep trying!