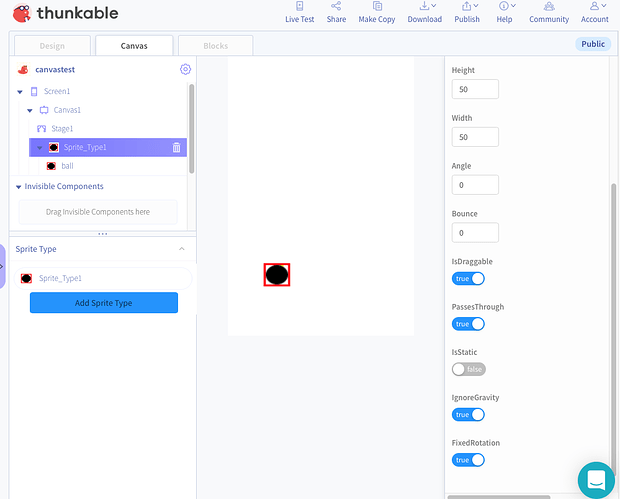 Hi there, @approeduc.
I couldn’t solve your second question about the block structure of canvas.
The “two sprites”,I can tell you that is originally and this is no mistake you did.This is default setup by the developer.

OK,
but what do I do, if I only want one sprite?

I think it is impossible to do it with one sprite.

The block “create sprite” is one too much. Without this there is only the one sprite designed in design mode.

But changing the direction is confusing.

What is the difference between the block categories “motion” and “direction”.
For me I would think that changing the angle in the motion blocks would solve the problem. But they do not.??

You just use the wrong block to determine the angle. Use this to get the angle. 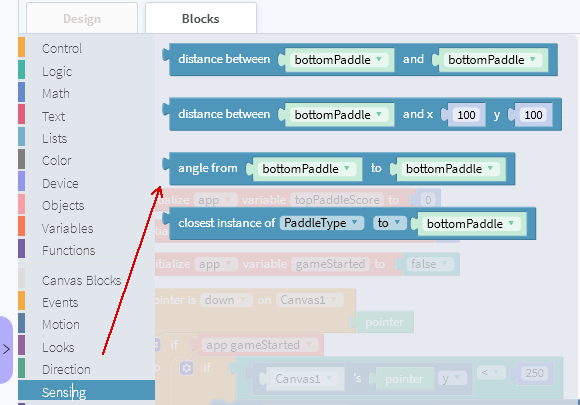 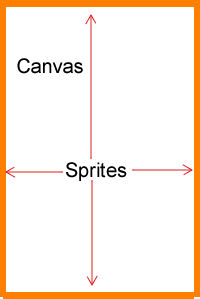 With the blocks that exist now, you can point a sprite in a direction and move it in that direction to simulate a bouncing effect: https://x.thunkable.com/copy/17af106c6ab74e175603e17903ff43f9

Eventually we’ll give you blocks that allow you to know the angle you are moving at, and the ability to set the speed at a particular angle, but we haven’t released those yet.

If you want multiple sprites that behave the same way, you can make them part of the same sprite type and they will share properties and code. In the example below, all of the sprites are in SpriteType1 and they all have a bounce of 100. Also when any of them hit any edge their angle changes by 10.

Thank you!
This answer explains the problems, I ran into.

So simplifying I understand:
We cannot determine the direction a sprite is moving and we cannot change the direction of the movement via programming an angle.

For now, yes. There is probably fancy trigonometry you could do to calculate the arctan2 from the x and y speed to find the moving angle, and to set the speed, but I’d just wait until we get the blocks released

Ok, this is what changing the angle does:

An example of obtaining the angle of movement of a sprite.

Your create blocks create an individual sprite programmatically. That is the way to go to keep track of the sprites in Your app. The sprite You create can then be reached via the green component block. The block where You show ‘ball’ can be omitted.

In the collide block, You should change ‘ball’ to ‘sprite’, by dragging the green block into the places where ‘ball’ is in the set angle block.

Particle movement in thunkable, for those interested. The particles however, slow down over time, and stop. I think this happens because of rounding errors as the collitions commence.