Was it working previously with Android, @jmrchy?

Hi, yes it was working fine on Android.

Rows and columns are now misaligned and badly sized (sorry for my poor english) the same as with the problem of november that needed a version reverse (object of this topic).
Regards.

@jmrchy Could you share your project URL? I will have to view it on my device here to get a better idea of what you’re seeing.

Hi, you can try this on Android and IOS :

The area outlined in red, those rows are not centered under the header of your app because the horizontal alignment of each row is set to left. 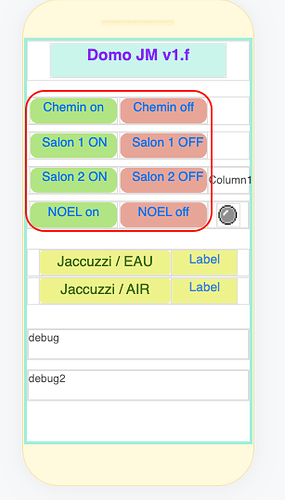 Do those all align the way you want when you set them to center?

Yes thats the way i want them. Correct on you screenshots. Is it a Thunkable live view or a preview ?

That’s what i can sée on live Android.

That screenshot is just from the designer. Here is what it looks like in the Thunkable Live app in Android. Based on the settings for the rows and columns, they are behaving as they should and you are not experiencing the same issues are the previous bug that was fixed.

Thank U for your answer, but the behavior has change with the last Android Live update - V361-11.
IOS has not been affected by this update.

All buttons , rows and columns are defined the same way. But i will check again