I working in an service app with 2 screens:

The first screen have 30 buttons (each button represents a business) ,

when the user make a click in a business buttom, the app send to the second screen.
Check below the next imagen with the first and second screen: 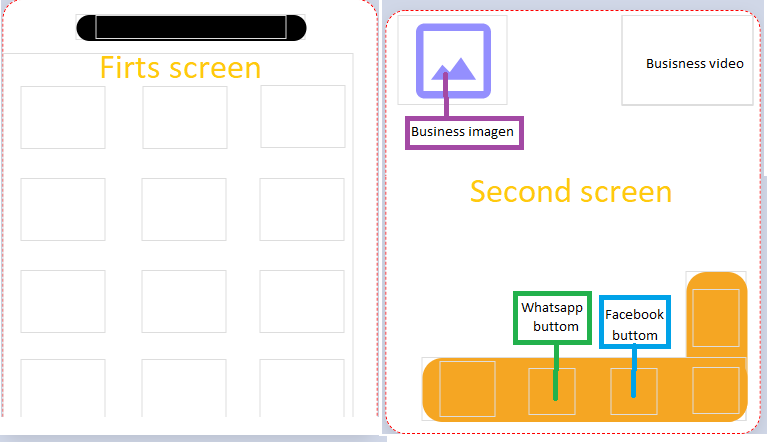 In the second screen, shows all business information like a buttom of whatsapp, facebook, video and imagen.

For not repeat 30 screens, the second screen is the same that others 30 business buttoms for the firts screen.

For the first screen, i built it this way: 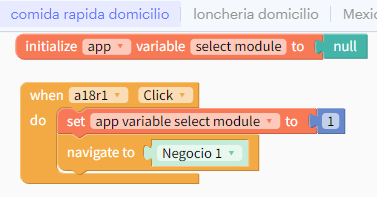 And the second screen in this way: 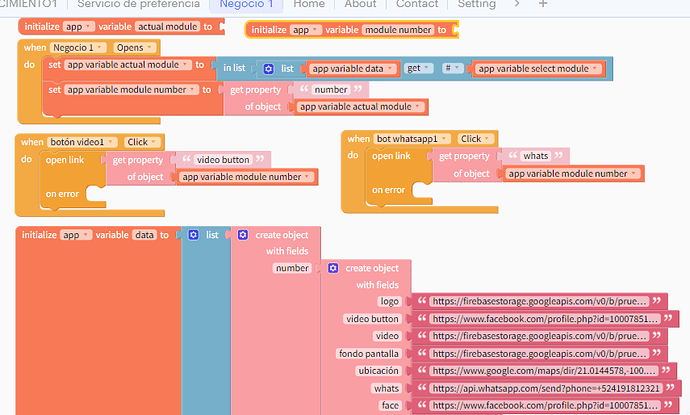 I can´t make the links load for each button (whatsapp, facebook, video with url)

Can you help me with this issue, please?

Before hand thank you for your time and support.

Personally, I would use a local data source (table) instead of a list of objects but… if you want to do it this way, it’s not clear why you have “number” as a separate field with an object inside. What is the number property for? A list already has index values so if you’re using it to know which list item it is, you don’t need a separate property for that.

Thank you for your quick response

For the list with the name “number” It was created following the steps of the video : 2 Methods to Reduce the Number of Screens in a Thunkable X App - YouTube (into the video, he put the “lesson” name)

and the name was more visual for me “number” for the module represents into the video.

So, i make this way because in the future i want to update the URLs with the cloud blocks and refresh the data in fire base in real time.

in this case, just i need remove the list “number” name?

or What do you recommend me?

Thank you for all.

I didn’t realize you were going to use Firebase later. Okay, it makes sense why you are using objects.

Make sure app variable select module has a value (e.g. 1 for testing) and then this should work.

thank you for your comments

Yesterday i made many test to charge a second module (objects) but i could not do it.

This is the first screen with the value “2” 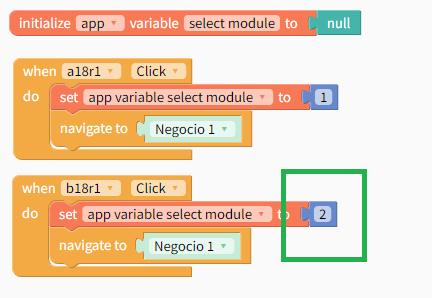 and these are the blocks in screen two:

Do you know what I can use to obtain the other modules?

You removed the wrong list gear block. You need the list block when you initialize app variable data. Because that creates a list of objects that you can refer to with list blocks or loop through to get all values/objects.

You do not need the list block when you are setting the app variable actual module. It should read:

But instead you have: 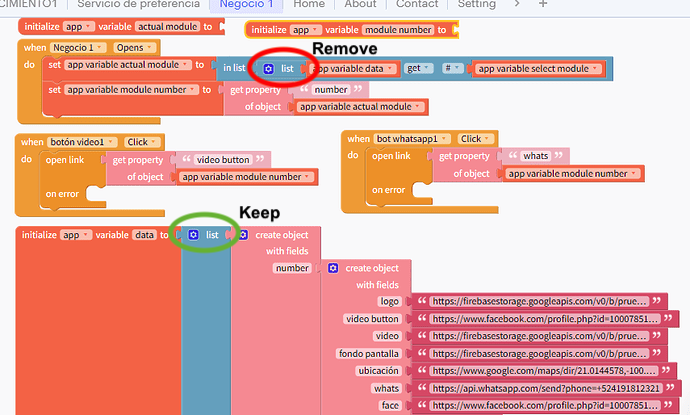 Please check out this post about accessing nested JSON

Hi tatiang
I hope you are good,
Sorry for the delay, in this week i worked to set up the app.
in this way, the app is working with the Urls but when change for the cloud to use the fire base into de app an error appears. check the imagens bellow 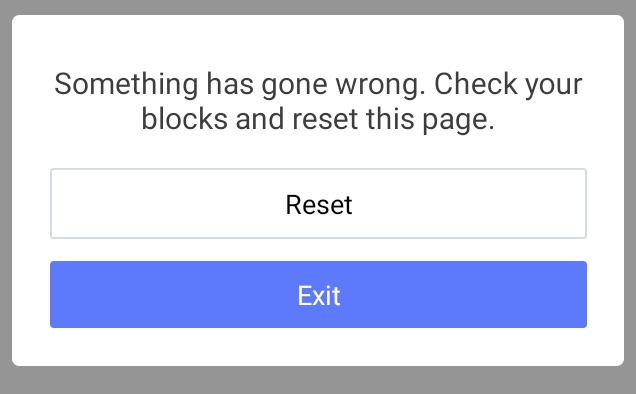 you are so kind to guide me, please?

I don’t think you can initialize a variable from a cloud variable value.

Just initialize the variable as null (no block needed) and then set the list and object values in the when screen starts block.

This issue was close with your help,

Thank you so much!

Have a nice day!