This tutiorial has six parts:

The companion project with all examples can be found here.

6 Likes
GET Json from API
How to create nutrition app with ocr scanner?
[Solved] Geocoding API to locate the address
drted February 7, 2021, 11:40am #2

What is JSON?
JavaScript Object Notation (JSON) is a standard cross platform text format for sharing data. Since Thunkable is built on Blockly (which started as a graphic JavaScript code generator) it make sense to incorporate the JavaScript native JSON features to store and share data.

Seriously, what is JSON?
JSON is text. As the acronym suggestions, it is text which represents an object. And what is an object? A JSON object (which is different from an OOP object), is a collection of name-value pairs.

A few things to notice:

In later lessons, we will extend this format to more complex data structures. But it is CRITICAL to understand that JSON is fundamentally a text string composed of name value pairs.

Thunkable Object Blocks
But this is Thunkable, therefore we are going to use blocks, not code. So let’s create an app level variable with the object {"alias":"drted"} using the Create Object block

Next, let’s create a screen to allow the user to set the value of the alias and display the value in a label using the get property block

Alternatively, the Set Property block could be used to change the alias property of an existing object:

To convert JSON into a Thunkable Object we can use the get object from JSON block:

As you probably already notice, it can get a little confusing remembering if a variable is text representing JSON or an object. Confusing these two forms and how to detect mistakes is the topic of the next section.

Special Case: Numbers
At the beginning of the lesson, I indicated that the value is encoled by double quotes " ". This is true when the value is a string (red Text block). If the value is stored as number (blue math block), no quotes are used:

happens. When it does, Thunkable misbehaves

. But these misbehaviors are predictable. This section will cover the most common errors and misbehaviors when working with JSON in Thunkable. When you understand the fundamentals of JSON and how Thunkable misbehaves, you will be able to identify 90% of all JSON-related errors immediately.

null Object
null is a little tricky to describe. It is not the word “null”. It is not a blank or empty value. It is simply nothingness!

Thunkable does NOT like null. Thunkable will crash. If we create a variable, set it to null, then try to treat it as an object, the thunkable app will crash.

When using the Web Live Test, the screen simply goes blank (white). When using the android live test, you will receive a message:

Likewise, trying to set a property of a null will cause Thunkable to crash: 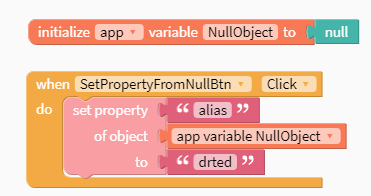 The simpliest way to fix this problem is to first check to make sure the object is not null.

And don’t worry about this affecting the end user experience. If you app is working correctly, they will never see this message.

This is where things get a little wierd. If the value is set to null and you display it in a label, it will show null. That looks like the value is “null”. 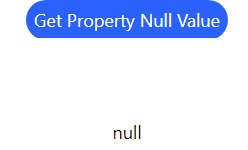 Notice anything strange? alias is surrounded by quotes, but null is not. Remember that JSON values containing strings are enclosed by quotation marks?

Once again, null is not the letters n-u-l-l, but a special case. Hence, it is stored in JSON as if it were a number. Weird, but true.

Here is a straightforward illustration of the point that a null value without quotes is not a word, but a special value.

The key lesson here is that even if the label shows the word null, you need to check for the special value of null (found in the logic blocks).

Text is not JSON
Working with external services (Web APIs, data sources, web viewers, etc.) often share date using JSON. As discussed previously, the get object from JSON block can convert text to a Thunkable object. But what if the JSON is not propertly formatted?

In the example below, the text is missing the final }

image701×172 14.3 KB
Thunkable simply crashes when this is attempted. Web Apps just go blank, device Live Test have an error message we have seen before.

To keep the app from crashing, there are a few simple checks you can make:

Variable not object
Despite our best efforts, occasionally a variable is set to an unexpected value. This can often occur when you accidentally set the variable to the JSON string, not a JSON object.

This will return the result undefined.

If you were paying attention to the null discussion, you might expect undefined to be something other than the string undefined. Well you would be right. Unfortunately undefined is not a string and there is no special block called undefined. But all hope is not lost! You can create a check that Thunkable will recognize by comparing the expected value to a known undefined value.

image746×282 29.4 KB
The good new is that you don’t actually need to do this. This type of error usually only occurs during development. As soon as you display the variable and see undefined, you now know what one of the sources is. Another source is described below.

Property does not exist
Similarly, if the variable is an object, but the property doesn’t exist, you will also get a result of undefined.

Strategies to prevent this from occuring are discussed in the Intermediate JSON and Advanced JSON discussions below.

[object Object]
Just as Thunkers sometimes treat JSON text as a Thunkable objects, if you are anything like me, you will eventually treat an object like text. Luckily, setting a label to an object creates a very distinctive message.

Summary
If you survived this TL;DR post, you now can troubleshoot the following errors when working with JSON:

Congratulations!, looking for the 4 situations will resolve 19 out of 20 JSON related problems. the remaining issues will be addressed in the sections below.

Now that you understand Basic JSON and JSON Errors we can now expand into more complex JSON topics.

Now the JSON is starting to look like a real application (a user profile). 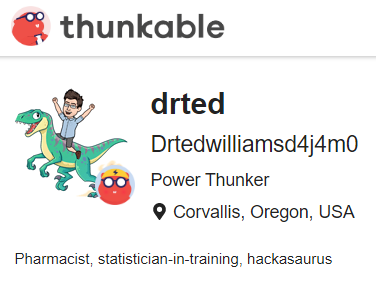 Nested Objects
Now we are ready to talk about how objects are REALLY used! Object can be nested inside of other objects.For this example I will create a sub object containing various ways to contact the user

Although it takes a few extra blocks the most straightfoward way to navigate nested objects is to set a variable for each level of the hierarchy.

An alternative technique involves using nested get property ... of object blocks. Start with the property of the deepest nested property. In this case, the email property in level 2 of the object.

Then, instead of supplying the object directly, I access the contact property of the Nested Object variable

Once you understand this technique, it is a fast and easy solution requiring very few blocks. For reasons we will discuss later, I would recommend against this technique.

How are nested objects translated into JSON text?

Notice the contacts property contains another set of braces. This is an important clue when working with external JSON sources: Mulitple sets of braces mean nested objects.

JSON Arrays (aka Thunkable Lists)
We have now seen how objects, bound by sets of braces {}, can be nested one inside another. But there is another way to nest objects within a JSON string, Arrays. Thunkable refers to JSON Arrays as lists. I will use those terms interchangeably.

List are bound by brackets [] and elements in a list are separated by commas, much like properties of a JSON object. You may find it helpful to think of a JSON array as if it were a JSON object without the names. For instance here are 2 examples of JSON text:
JSON Object: {"alias":"drted" ,"status":"Power Thunker","location":"Corvallis"}
JSON Array: ["drted", "Power Thunker", "Corvallis"]

And their Thunkable Blocks

Although Thunkable blocks separate OBJECT (pink) blocks from LIST (baby blue) bocks, the JSON DNA of the Thunkable list is revealed in the ability to use the generate JSON from object block on a Thunkable list object: 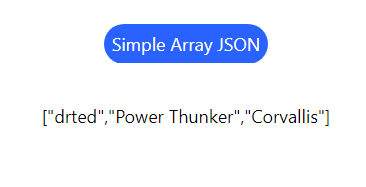 In the example above, the list contained text (aka strings), but lists can include anything, including objects: 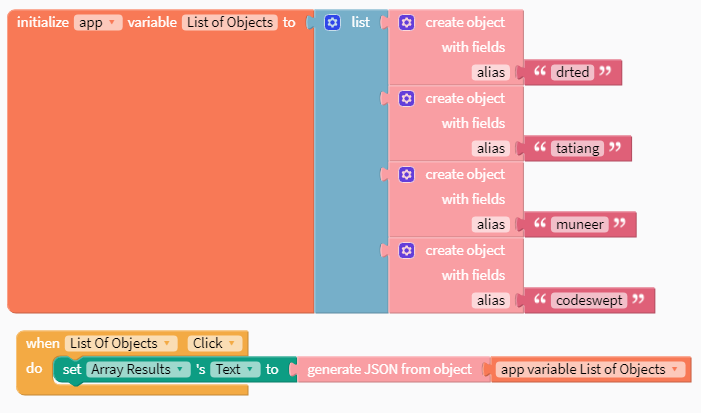 Notice that since it is a LIST of OBJECTS, the braces [] are the first and last characters, while the brackets {} are inside the braces.

Notice in this example, because the OBJECT is the top level element and the list is a PROPERTY of the object, the brackets {} are the top level and the braces are inside the property friends

If you survived this TL;DR post, you can now:

That is a heck of a lot of technical content. Try building a few apps using what you have learned before you move on to the next lesson, where we will explore how to programatically navigate JSON hierarchies.

This is great @drted! Very useful to beginners with JSON like me.

Oh wow! Hugely useful. And very timely since my students are diving into APIs and JSON for the first time. Thank you for making this!

Sorry for the lag @jeffd, @codeswept, @tatiang. I’ve had a couple of other projects demanding my attention (work, continuing education, etc.)

When is the web api tutorial coming out?

I really need this :c