I am using the map to track pets. Each marker that is placed down is a pet’s location and when I get an updated location of their whereabouts, I have to delete all the markers to update one pets location. I’ve temporarily found one way around this without having to delete specific blocks. I have to set the location variable for each pet and then update each pet’s location every time there is a change. It’s a lot of unnecessary blocks and I also can only have as many pets as there are variables that I set up beforehand. It would be nice to have the option to track as many pets as I want without having to set a variable for each pet. One variable should be enough.

Care to share how you update a single marker ?

If you’re using many variables to store the same type of information, then you really should be using a list instead and storing that list (which is dynamic in size) in a single variable.

Right now, this is how I update a single marker. I only have the option for one pet atm. They also have a choice of which kind of map layer they want to use. 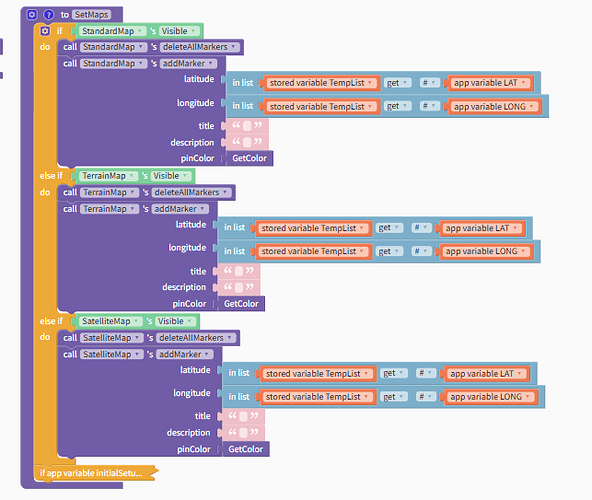 Right now this is how I have everything set up:

The values I would like to store are the Coords for each pet that way if there is a loss in power or disconnection from the receiver it will have the pets last location. I just need to update the rest of the data but not store it. Each pet will have their own unique Harness ID, and that’s how I tell them apart.

I guess my thought process was if that data coming into the phone had a different harness ID, then it would just delete the marker with that harness ID. But I guess long term for what I’m wanting to do, it would be better to store all that data in a list for each pet somehow.

If you more than one or two categories of data (you have ten), then you should be using a Data Source, not a list and not a bunch of individual variables.

I didn’t even think about using a database. Thanks for that suggestion, I’ll look into using an internal one.

Please add this as a Feature