The Tutorial
I am adding this post under Video Tutorials since the discussion stems from a video tutorial I made on how to create a simple to do / task management app. Here is the original video: 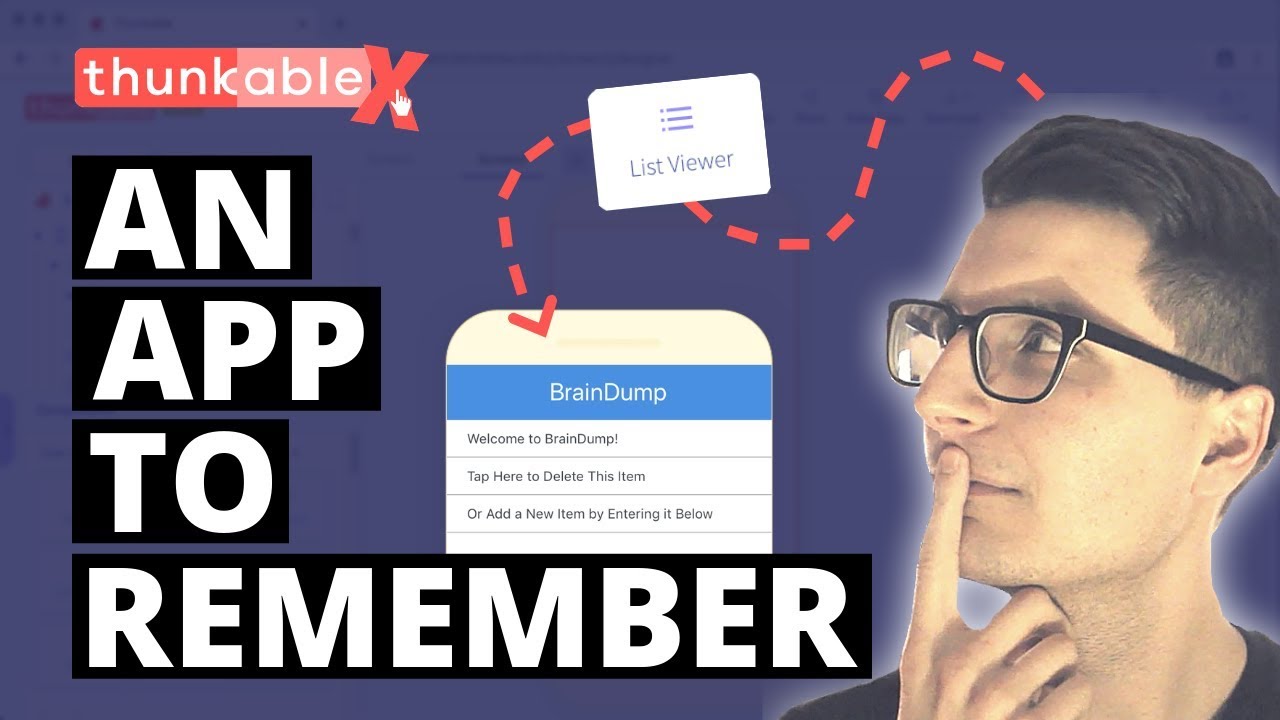 Explanation
Someone tried replicating the app and wanted to enhance it by storing the tasks in a stored / local variable. However, this code was not working. 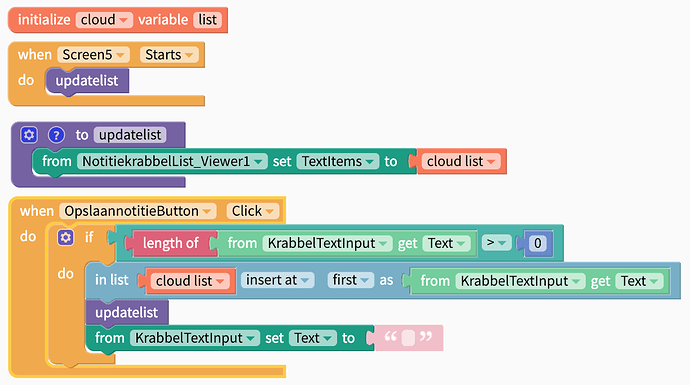 Problem Code
The problem was he was trying to add the input item to a list variable BUT the variable had not been initialized (or defined) as a list.

An Incorrect Solution
Your 1st instinct may be to set the variable to an empty list whenever the screen starts. This does not work because the app ends up clearing out the list every time you close and reopen the app. This defeats the purpose of the stored variable.

The Correct Solution
Rather, a better approach is to only set the variable to an empty list IF the list has not yet been defined. This makes the stored variable a list variable IF and ONLY IF the list is not yet defined. Thus it will not clear out any items previously stored in the list.

The Final Code
These are the final blocks that I got to work. 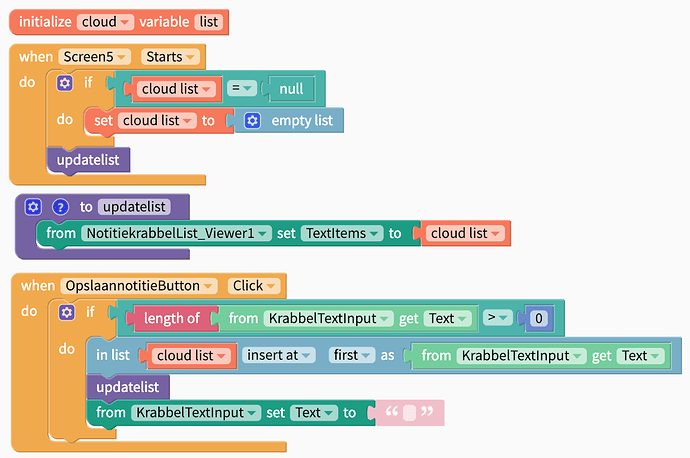 Let me know if you have a better solution to this - hope this helps you in your troubleshooting in the future!

6 Likes
[Solved] How Can I add or delete Information to a List Viewer and save it or delete it from Local Data Base?
How do I initialize a stored variable? (Twitter Post)
[Solved] Why are list items being displayed as lists of letters rather than words?
Buzzword Bingo - Just don't tell the boss you're playing
Editing Thunkable X project in Appy Builder
Checklist for thunkable x
lflfm January 25, 2019, 8:45am #2

This is really nice; you guys should update the chat tutorial to be a bit more list this; the current tutorial saves the text onto a single string variable so it’s confusing as to how it could actually be used in a real-life scenario…

also, please fix the WebAPI component (at least on iOS) it simply doesn’t send any headers or body

(or maybe I’m doing something wrong and a tutorial using it would help…?)

Hi Darren,
The piece of code worked perfectly!!
Thanks for helping out.

@Dinto has also mentioned wanting a chat app to me before, but I think the list viewer needs some more property features before we could make one.

I think at a minimum, I would want to be able to left or right align different elements in the list viewer, and also add styling like coloring. Currently these features are not available.

@Dinto Glad to hear it. I also do not know of a checkbox feature to make complete.

That’s one to try.
There two thing actually;

I’m now storing the variables in the app ( at first seen in your tutorial in the cloud) How can I get this right?
Regards, Dinto

For #1:
Please share a screenshot of your app or send my a link through direct message.

For #2:
This may be because you are testing in the live app or using a cloud variable when logged into the same account. I would start out with a stored variable. It is really up to you. Read more about variables here: https://docs.thunkable.com/thunkable-cross-platform/create/blocks/variables

Hi Darren,
It’s been a few day’s ago, busy:sweat_smile:

Still having problems with the issue above;
I have two list, list one: Notitie and list two: Boodschappen.
When I add items to both list, and delete an item on one list, it deletes the item on that list but when I delete another item from the other list, it doesn’t delete the item I touch but the one under that item…
I’ve delete the screens and start over again because thought it could also be a bug in one of the listviewers, didn’t help.
I’ve also change te code a bit, with local storage instead of the use of stored variable.
Could you give it a try?
I wil send you the project link

I believe this is a bug in the Thunkable code. The issue is with list indices, so anytime you are using a list, you may run into this error. See the issue on github here:

There appears to be a bug in the “in list get #” block when used in combination with a list viewer....

This check is currently working for me, so try this approach out:

Hi Darren,
Thanks for your help!

I am going to try your lines of code…
I will let know if it works for me.
Thnx in regards

I read that it is a bug…
The notitie screen is working, but de Boodschappen screen is now deleting two items at a time.
Or if I tap two times on an item the whole row with 4 items disappears.
This don’t have to be that difficult?
here is the List_viewer code… 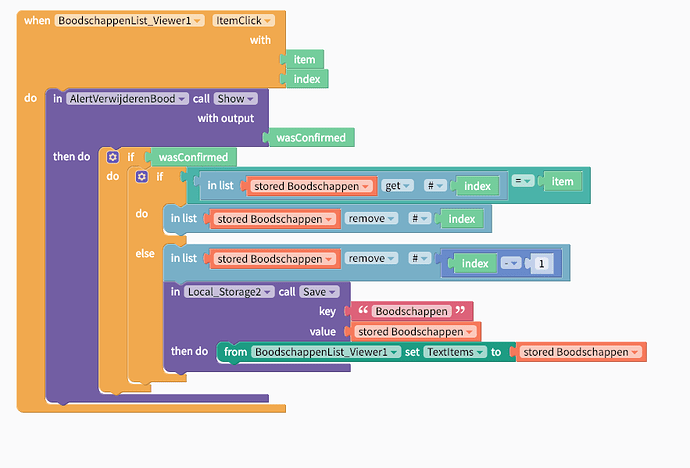 I am trying to save text in a text input box. Any ideas on how to do this? I would like to add a journal feature to my app. So users can add text, save the text and then add more text to the existing text when they reopen the app. I am new to thunkable! Thanks in advance.

Both of these videos show you how to add an item from a text input field to a list viewer:

And this is an example of the blocks you will need:

I can’t seem to figure out a way to change the firebase path. With the example above, when I save the list I have a “folder” called list in firebase at the root. but I actually want to save it as “folder/list” instead of just “list” (basically have the list in a separate area instead of the root).

Folders are created in Firebase by using ‘/’ or by saving objects. My tutorial here explains that concept: https://youtu.be/htjhe0KEFBQ?t=807

Another option is to save your list as a cloud variable, then if you have firebase hooked up, each cloud variable will be a different folder in your firebase database. This is the newly suggested approach. Check out my most recent tutorial that explains this:

Son of a…I did it! Got everything working. Maybe it was just a matter of time or a third look-through of your video.

Just wanted to say thank you for not only replying to me but also for making very good thunkable-related videos.

Awesome, glad to hear it!

Hello.
I would like to know if it is possible to delete an item from the list.
Your code from The Final Code save local the items but I am not able to delete them now.

I was reading all the post from here, but in the end it is not clear for me if it is possible or it is a bug that does not allow this.

If it is not possible, I guess would be helpful to update somehow also the info from your channel that sends here.
It is a great channel and would nice to keep it accurate.

Of course, you can remove an element from a list. This block:

is doing just that. You just need to know which index the item occupies (and for that, the “in list () find first occurrence of ()” function can be used).
Note that this will NOT remove an item from a list stored in a database. For that, you need to