Can you explain this a little more or provide a video of what you’re seeing?

Hi @domhnallohanlon, Thanks for getting back so quickly. Yes, the issue is that some students have created screens using StP and others have used DnD as we were not aware of the inability to import screens from one project type to the other.

I believe I read that it is possible to convert projects from StP to DnD (but not vise versa?) Could that be a potential solution for us if we convert all StP projects to DnD? Would the save screen functionality then be available?

I would be happy to jump on a call if you are able to provide some solutions.

I love DnD but there are some issues i would like to see updated.
Missing components from Snap to place. I have a snap to place app i want to update to DnD but DnD does not have the volume controls that i use in the app. Really need more options under “any component”. Missing things like “create” and “clone” are huge. I agree with what others say about groups in DnD. It does not always work well and I have started to remove them from my apps. i liked being able to have things together, but they don’t always stay where i wan them to. Overall, I like Drag and Drop and am looking forward to getting more features so i can do more with my apps.

@daniel.c.rauschk96lu Yes. I added my own thoughts here:

Some things I’d like to see implemented in the future: Allow users to collaborate on a single project simultaneously. This would be a great feature for teachers to use with students and for small businesses to use when developing apps. Add versioning and back ups of projects. As it is, we have to keep copying projects each time we make edits and it’s hard to manage the list of projects. Single projects would have version history as in Google Docs. Add better support for Bluetooth devices. Ther…

Just coming back to this thread to share some thoughts regarding my attempt to transition from StP to DnD.

DnD has made great strides, but I still cannot transition away from StP. While DnD does appear to now work on filling up different screen sizes the way I can in StP (phone vs tablet and different sized phone screens), the inability to get Relative to Screen and Relative to Device to function properly is a deal killer. StP is still the superior design/implementation interface in that aspect.

The good thing is that I now have a DnD implementation that is ready to go, with some adjustments, if this issue is fixed. The DnD interface is excellent and I love its ease of use and how it is displayed in the browser. But, I can’t torpedo my app and publish the DnD version until this is fixed.

The Layout component being tested should provide some of the functionality.

I’ll have to check it out. The Relative stuff has been driving me nuts and I am trying desperately to get a test version out to my testers soon so I can get my next version out by mid-August to fix crashes and add a few new things. I may just take my new StP version and convert to DnD after it is published.

I made quick tests on the Layout component and it provides nearly the same functionality of row and column components in StP but I have not tested it further to see how it will interact with different components.

The idea of the Layout component is, I think, to have part of your DnD screen to work as StP in positioning of components inside it.

Hi @ronnie, we released the ability to set Groups Relative to Device and Relative to Screen. It should be at the top of the properties panel.

Have you already tried that? Could that work for what you need?

@cassandra, I have tried them. I have another post where I put screenshots of the errant behavior. Essentially, I have buttons that should be hidden but are not. I posted about it here: Release Update 6/1/2022 - #10 by ronnie

Hi @ronnie - appreciate your detailed feedback! I’ll make sure the team is incorporating that into our next iteration of this capability.

I am new to thunkable and did not know how StP worked so I don’t have Basis for comparison. But I do know the raised function displays differently on the Live App than when it is printed to apk. I just the raised feature to over lap the corner of one button for an ‘i’ or an information alert.

The button would display on top and not be touchable. Or the inverse. The i button would be hidden, but touchable. As if the button visually and physically worked backwards of eachhother. And it displays differnt from apk to live. I would recomend taking a look at the raised funtion.

Also from tutorials I’ve seen there used to be an Z axis. I would recomend bring it back with maybe a 0 +or- 5. Just for layer sake. I assume that’s what the ‘label build tree’ on the top-left is supposed to do since it can be swapped around. Except with raised the funtion is goofy.

Just my simple debug experience with the platform.

Hi, Christine and @domhnallohanlon. Was there a good workaround for this? I’m in a similar situation.

Been building for a couple months on DnD because it was the default on my First Time Experience. One feature that would be nice if it and StP will be continue concurrently is a decision tree to help me decide which would fit better.

Knowing what I know now, I would have wanted the additional control of StP, partly because I don’t have the luxury of time using Layout (sorry @muneer). But that’s a whole 'nother peanut butter.

One of the things I wanted in my original design, but can’t actually do in DnD, is change the color of an art asset (bg of a gauge), based on a data condition (UV Index pulled from an API).

I’ve been given a ton of advice by @tatiang and I’m at the point where I think I’m ready to import a DVL. I used Custom Layout, like a simple CSS, to create 2 unique assets (AVI and UV).

And now, can I pull it into my DnD project, which I believe is possible? Any suggestions for next steps?

PS – I’ve prowled around /projects in grid and list view, as well as My DVLs. If there’s UI for it, I’m not having any luck finding it.

@deanmachine Have you watched the video here?

I think it’s pretty thorough. The only addition for DnD is that after you save the custom layout in the StP project, you open the DnD project and select the layout for your DVL (the same way as in the video).

I did, yes. Thought it was Jared, at first. And I’m still not sure, tbh.

It helped me understand how to create the template I want to import. I’m sure I’ll have to iterate and learn, but think I have a (decent) understanding of StP now.

though there is some resemblance perhaps. I don’t use the dvl anymore, only the beta layouts component as it works very nicely!

please in drag and drop you need to be able to add custom layout code for the maps. It is a great function available in StP

Can you give an example of what you mean?

I graphically illustrate the characteristic to which I refer.

It’s a great feature to create 100% beautiful and custom apps with the map component. 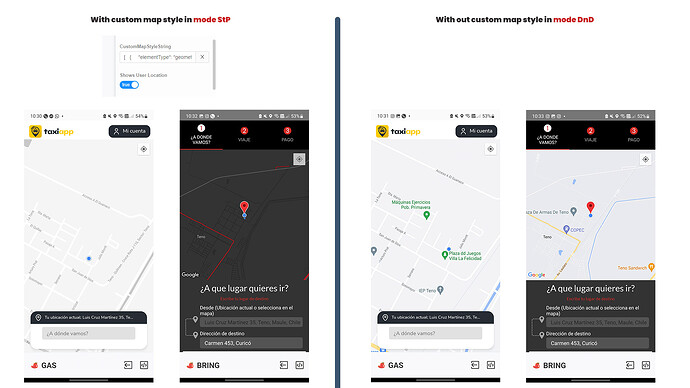