Creating a grade from a variable

as an example the range would be from under 10 to over 29.

I split that into 5 groups

This question came up recently… please see this post and let me know if it answers your question:

How to calculate this formula and display percentage? Questions about Thunkable

You’re welcome. Your percent—>grade question is typically solved with an if/else if/else if… set of blocks. But it can also be solved with a series of stacked if blocks. Create two variables called percent and grade. Set percent to the value you calculated (such as 71%). Then set up this (I’m using sample values… your actual ranges may be different): Edit: Oops! I originally had these in the wrong order. It should be: If percent <= 100 then set grade to A If percent < 90 then set grade to B …

i was able to come up with this solution, and it works fine for what I need. what tripped me up was that I did not find a math block to give a set range between two numbers to pair with the if-then block 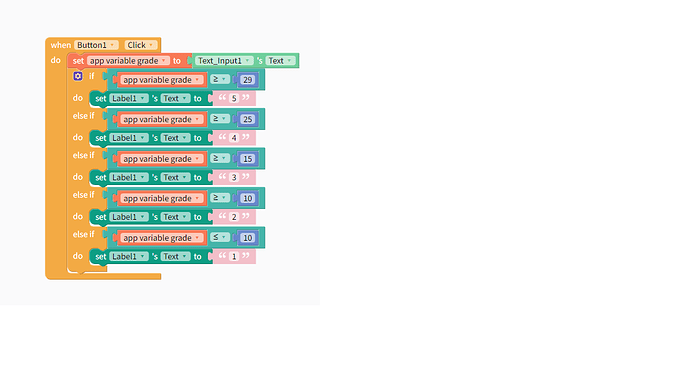 I actually wrote a function in Thunkable a while ago that takes a list of numbers such as 29, 25, 15, 10, 0, and then using a loop creates the conditions for everything you have in your screenshot. It’s pretty hard to wrap your mind around so I don’t recommend it but it is something I can use over and over instead of having to create all of the individual blocks like in your screenshot.

It’s probably not going to make a lot of sense but this is what it looks like: