In the live test app on android there is an UGLY bar at the top with 2 blue buttons -BACK and VIEW CODE - and the name of the app in the middle. 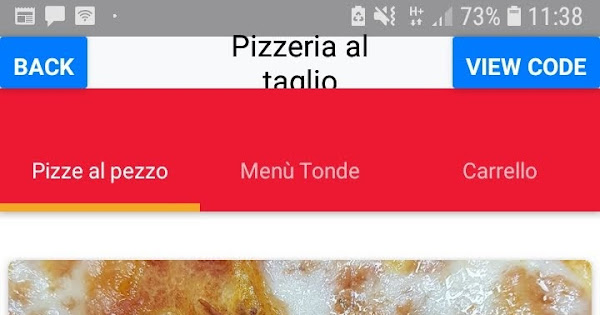 it’s useless and gives a wrong idea of how the app will look.

Is it possibile to remove it?

Hi there,
As I have feedback in the community, it seems that we cannot remove by ourselves.
Thanks.

Hi @maxb, thanks for the feedback.

I’d beg to differ - the live testing app gives you the ability to live preview any of your Thunkable projects quickly and easily. The back button allows you to move from a project back to your list of projects.

The View Code button allows you to inspect the blocks that are associated with that particular screen and can be very helpful when debugging or when trying to understand a public project.

gives a wrong idea of how the app will look.

It give a pretty accurate representation of what the app will look like, with the added benefit of real-time updates. If you need to to be 100% accurate for device art etc. the you can install the app on your device!

Hi there,
As you said.If I need 100% accurate design test.I must download the app to see whether the design is your imagation or not.So that you said cannot remove the bar.It is so terrible.Now I would be flattered to add back the shake function in the live test app.Therefore,the live app will be better to shown
Sincerely,
Thank.

Hey @domhnallohanlon, ok for the back button, you are right, but the view code one never wor…

oh, ok, i thought it was bugged, I had to wait and saw it works,

though doesn’t feel very practical to say the least…

Yes that’s so weird while station on smaller device.

Hi there,
If it is possible, rather than make two fingers to point to the screen,then show the options.

I will have to download and phisically install the app on both phones to understand if the app looks fine… (?)

I’m guessing they’ve added this bar because of the new accelerometer functions (meaning you can’t “shake” to go back to your list of apps).

That said, it definitely detracts from using Live Test to preview my app, and while I can download the app to test on device, it takes a while to generate an iOS app and receive the link, so it’s causing a serious delay with being able to preview my designs accurately.

I’m really hoping the Thunkable team can come up with another solutions rather than using this added bar at the top, because it’s very frustrating, and I feel like more users would prefer being able to see a more accurate preview than use accelerometer features. Why can’t those using the accelerometer be the ones who need to compile and install the app to test it? Seems like that would be the smaller user group.

edit Just to make a suggestion, why not add an option inside of the Thunkable Live app allowing us to toggle this off or on? The accuracy of the live test preview was one of the biggest selling points of Thunkable for me, and that’s now gone…

In fact now I really DON’T know if my design is how it looked before the white bar (everything in place), or how it looks now (completely messed up, elements out of the screen, references gone)

I completely agree with you.
I also think it should be possible to turn this option on and off, at least on the PRO plan.

The screens within the “Bottom Tab Navigator” are now pushed down for 10 pixels or so and therefore the menu items are now cut in the middle (see screenshot).

So as long as the back button is there, is there anyway I can see the whole menu again in the live preview?

So is there any way I can see the menu normally?

As of right now, the only way to view your app without the added bar is to download a build of the actual application and install it, unfortunately.

Yes thanks. I already did that.

Would be interesting to know what thunkable plans on doing here and if they will keep this.

It give a pretty accurate representation of what the app will look like, with the added benefit of real-time updates.

As you can see on my screenshot above, that is not really close to what the app looks like.

@domhnallohanlon Do you plan to make any changes here and give us the option to turn this on/off?
Thanks!

I am really happy with Thunkable and recently switched to the PRO plan. I started working on my app a few months ago and I am just a bit irritated by the way this “feature” was implemented.

@Domhnall Do you plan to make any changes here and give us the option to turn this on/off?
Thanks!

Just curious if we can get some official feedback on this? When trying to tighten up a complex layout, this change has made things a hundred times more difficult.

OMG Thunkable PLEASE remove this or at least allow me to disable it. It pulls down my whole screen which is useless if I can’t access buttons at the bottom of my screen design!
PLUS my daughter will need to submit her app to a competition where the judges will simply test from the Live Test option! They’re not going to bother to download and install it.

If all the contenders use thunkable live I’m sure the judges have to be informed of this problem, install the app, or use it from the contestant’s phone

1. Double click the iPhone home button to bring up the UI below, move up to force quit the Thunkable app 2. Reopen the app and long press the My Apps section, it should pop up the following alert, which shows v56-49; repeat the steps again if you...

This now works thankyou - however I think this may have effected connectivity to firebase, both on the companion app and when downloaded the app is erroring and resetting itself when the realdb component is called - is this a separate issue - it only seemed to have just occurred?