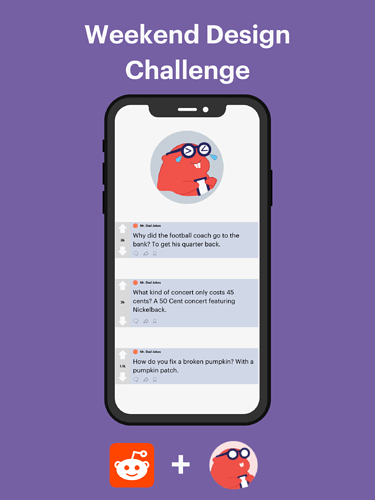 With April Fool’s Day (April 1st!) fast approaching we want to add a little levity to the Weekend Design Challenge.

This time you mission - should you choose to accept it - is to design and build a beautiful, Reddit-style jokes app.

What do we mean by this? Well, the core functionality should;

All you need to do is join the discussion here in the Thunkable community and submit a project in April’s WDC for a chance to win:

Featured in our monthly newsletter

May the funniest app win!!

I was just about to ask if there would be another WDC soon… yay!

Working on this joke teller now…

I liked the challenge !!

We’ll have to keep things interesting since we’re running this over two weekends now. How about a poll?

What’s your favourite joke out of the offerings below

So far, my favorite joke from the API I’m using is:

A steak pun is a rare medium well done

It took me a couple minutes to even figure out what it meant!

i can load jokes from reddit (you need a reddit id to run the api, but it’s so simple). i split my app in 2 parts: one to call reddit and load my jokes google sheet. and the other to view them.

here’s the first part of the list viewer showing the titles (usually the first line, or the question part) - you have to click on one to view the rest of the joke: (warning NSFW!) 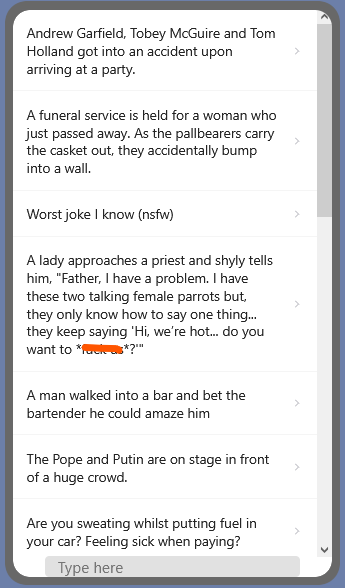 here’s the punchine for the first joke (i like it) 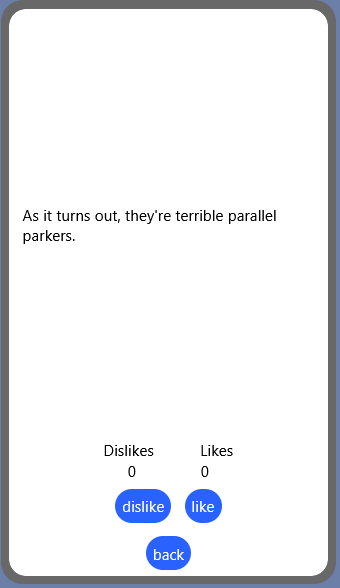 here’s the rest of the Pope and Putin joke… 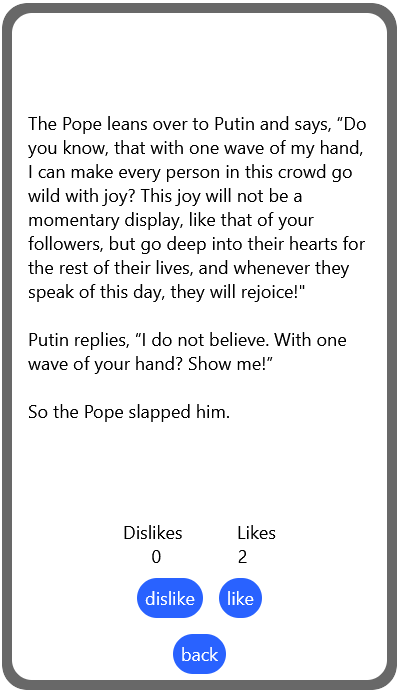 i have the viewer part partially working:
the only part i get frustrated with is the delayed update. ie. if/when i click Like, i see the count go up but when i go back to list viewer and try to read the same joke - the count doesn’t reflect the new count. the only time it does is when i exit the whole app and restart. i may just remove those buttons and just make it read only, with no voting buttons!

i will upload the half-apps later but if you want to see my current joke list, here it is (warning NSFW!):

Sheet1 id,title,joke,dislikes,likes tlfnm2,Andrew Garfield, Tobey McGuire and Tom Holland got into an accident upon arriving at a party.,As it turns out, they're terrible parallel parkers.,0,0 tktv1d,A funeral service is held for a woman who just...

i may be updating it anytime (to make things easy, i just erase everything and re-load with a fresh batch).

i just got an idea for the joke viewer app. you should be able to make thunkable read the joke to you, on demand, or all the time!)

i can load jokes from reddit (you need a reddit id to run the api, but it’s so simple)

Ah…good point! Participants can pull data from anywhere they like, but I’ve updated the first post now to include a link to our new Thunkable Academy article on working with a Jokes API:

Looking forward to seeing all the entries and awarding the prizes

Yep! The problem is that I keep adding features and then giving myself more work. I’ll share it soon… 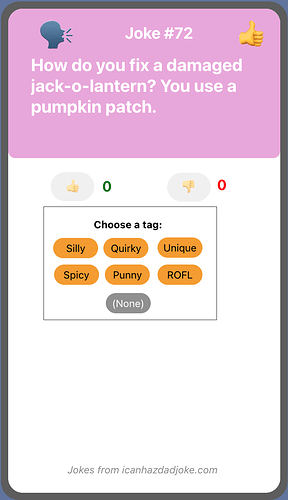 What you have at the moment looks great - what are the extra features that you’ve added to the roadmap?

By strange coincidence, I noticed a jokes app on Product Hunt today: 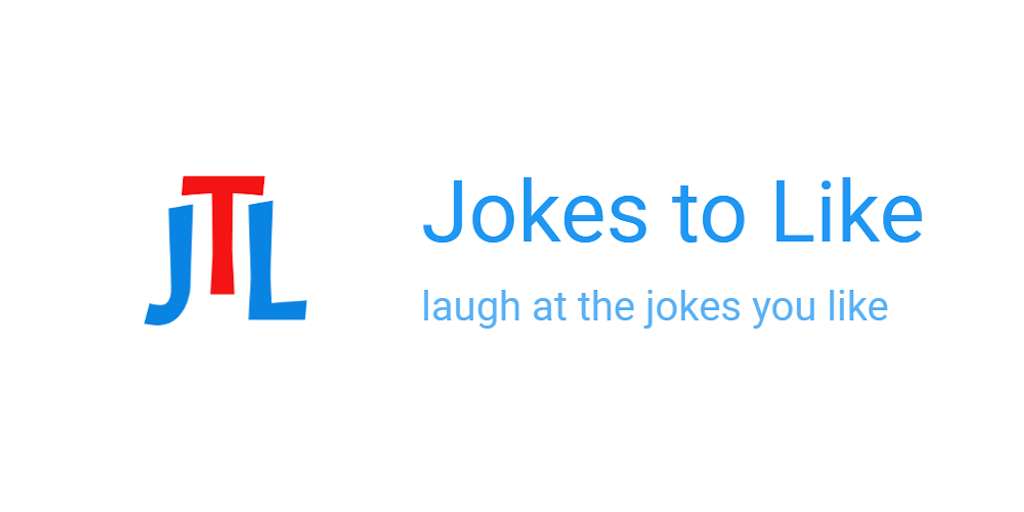 JokesToLike - A good laugh at the jokes you like | Product Hunt

this is an open source fun Jokes app for entertainment. like and share funny jokes with friends and family.

I’d feel like anyone in our #wdc community would be more than capable of doing this too!

I think I have all the features I want. It’s more that it’s easy enough to add like/dislike and tags for a single user but a bit more complicated to get it all working for multiple users.

Mostly, I just haven’t had time. I’ve been away from home and work for a few days.

my first entry consist of a set of 2 apps and it’s meant to be used in a club or user group whose interests are the same (and hopefully their taste of jokes too!)
the first app, REDDIT_LOADER requires the owner to have a reddit id. the owner runs it to get a desired number (selectable) of jokes to load to a google sheet. note: the loading process totally replaces the current contents of the google sheet. 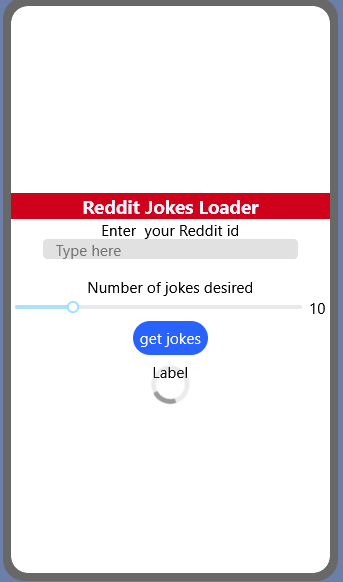 the 2nd part is the REDDIT VIEWER. the owner of this app doesn’t need to have a reddit id. this app has read only access to the google sheet loaded by the loader app above:

here’s what the viewer displays: 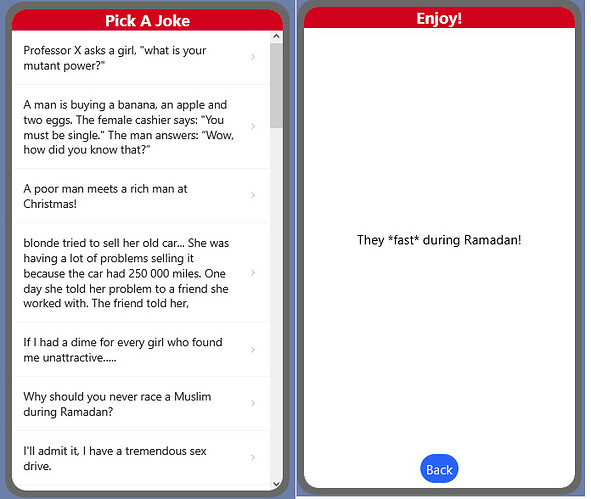 that’s good if it works for the club.

how about for the single user?
so i also created a special version called REDDIT_LOAD&GO which is meant for the person who just want his quick fix of 10+ jokes a day and be done with it. this version doesn’t save anything, it merges both of the functions above (load and view) without the use any other storage.
this app also requires the owner to have a reddit_id.
here’s the project:
https://x.thunkable.com/copy/ff464c3da0030c6aada641df60480977 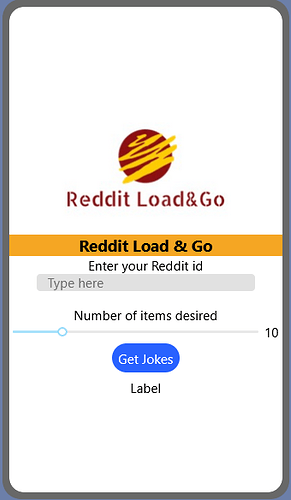 I found it too late, can I join?

hello all, this is mine- Thunkable
Images(light mode)- 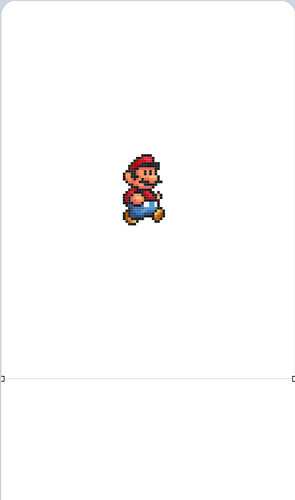 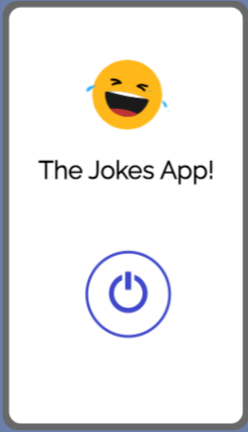 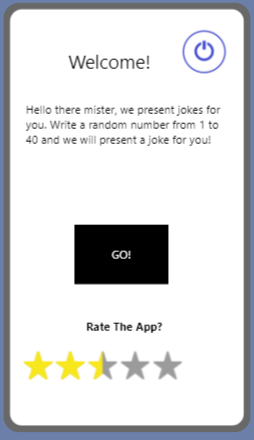 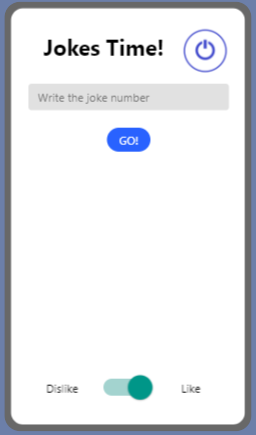