I am trying to make it so the map in my app only loads markers within a 50 mile radius of the user’s current location. (I am saving the map marker latitudes and longitudes to Airtable.) Is this possible? If so, how would I go about coding this?

In the simplest case, you need to calculate the distance between two markers. if it is less than the specified radius, then output the marker.

Okay, thank you! Could you direct me to a Thunkable app that utilizes a function that determines the distance between two coordinates?

See this app! I am working on videos and polishing the app currently but can answer questions via dm

Needing a new backend solution for your #madeWithThunkable app? Try @backendless today! Get rid of the limitations imposed by @airtable and move beyond the difficulty of @firebase (though each has their place)! Check out this template CRUD application https://x.thunkable.com/copy/83612c4b430ae494eadee2edf27f3b1b[Depricated] This will get you up and running quick! You will only need to change out the @backendless URL’s. The rest is up to you in terms of styling or incorporating it further! I wi…

Here is a general page on the calculations. Then you can use Thunkable’s math functions.

Program for distance between two points on earth - GeeksforGeeks

That is a good suggestion @drted, did you check out the app I linked to above? it demonstrates how to tie into a backend that does the work for you. It does search in radius and loads markers within a set radius of the user. all the phone does is send the query and load the markers!

Haversine is good. but iit only tells you distance. you’d have to do this for each point on the map, right?

jared, yes the backendless WebAPI is super slick and MUCH easier than “Rolling your own” solution. Sometimes it is nice (and FUN!) to do it yourself. Doing it within thunkable does have the advantage of reducing external dependencies. Thunkable has enough of those that we have all felt the pain of a third party modification changing thunkable behavior breaking our apps.

Thanks @jared and @drted! I’ll play around with these methods.

In gratitude to your tip and commitment with the community, following the function ported in to Thunkable blocks: 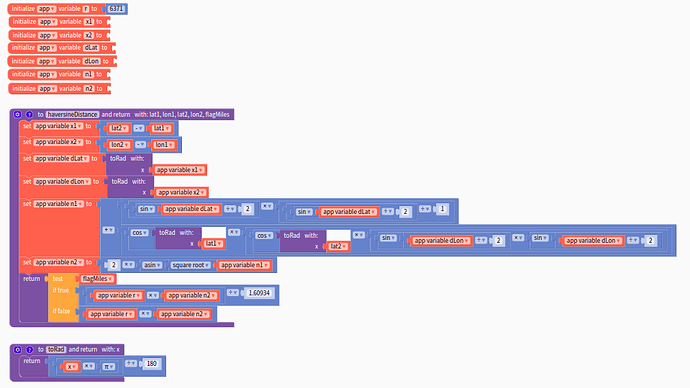 You can feed it the lat and long for both location 1 and 2, true/false for returning miles or KM. this will return an object that has the distance!

Quick and easy. each response takes apx 44 seconds when the function is warm. If you are doing a 1 off calculation, it takes about a second.

i also replicated it in cloudflare for fun. always faster than the one above