Guys, as I’m used to Kodular in this new Thunkable, I’m having doubts about the blocks.
I have two variables: Images and Index. I made a list of images that should appear in the column. But I need to select the list items according to their index. Where is the Select list item list/index in the thunkable.

You have it set up correctly except that you used two list blocks where you should only have one. Remove the list block with the gear and it should work.

Thanks.
But I’m still confused and I still haven’t got used to this new version because before Thunkable was the same as Kodular mainly in the blocks part.
For example in Kodular the Vertical Arrangement can be clickable. Not in Thunkable’s column. Kodular’s Tinydb in the thunkable became Local_Storage. So it’s hard to understand in this version now.
The purpose of this screen was to create an introduction to the App. The four images would appear the first time. I put Tinydb to save the information of the first access. The next time he opened it, he would already enter the login screen.
I’ll put here how the blocks turned out in Kodular. If anyone can help me with this new version or an explanatory video what has changed I would appreciate it. 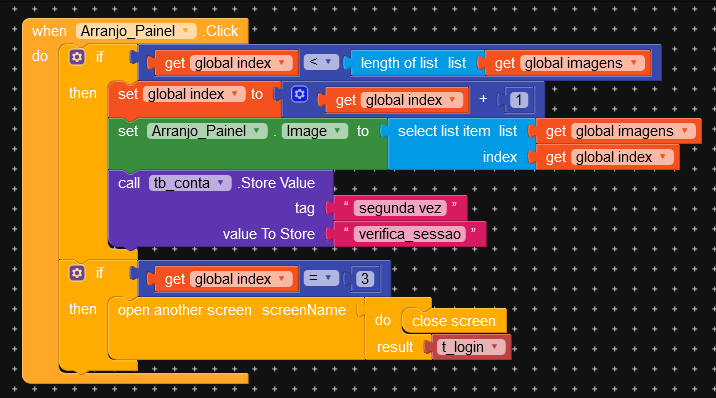