How to Speed Up Creating Rows in a Google Sheet

I’m storing data in Firebase for a book catalog app I’m developing. I’d like the user to be able to upload the entire Firebase database to a Google Sheet. I have it working but the transfer of data is quite slow. It currently takes 6 seconds to create 8 rows of 16 columns each (one book’s data in each row). That seems really slow to me. I’ll eventually be cataloging hundreds of books so that transfer could take several minutes.

Any suggestions for speeding things up? I already assigned the cloud data to an app variable to prevent having to access Firebase over and over (for each column value).

I’m also open to other suggestions such as transferring data to Airtable instead of Google Sheets or using an API/script to create the rows in the Google Sheet (perhaps that would be faster?). 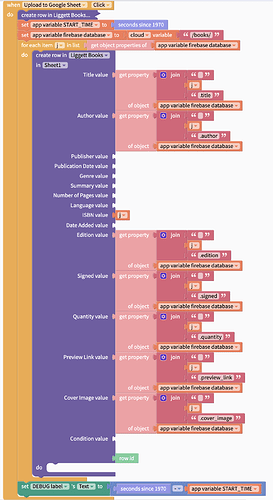 A google app script would speed things up for you I’d imagine or sending the data via the web api connector.

I think @cttricks has posted this method in the past. You’d have to do a search.

Is there a reason you’re putting it from 1 cloud service to another? Could you take the data from Firebase and use a local table to hold data to be displayed in the dlv

I’ve found Google Sheets to be a little unreliable for this process. It’s probably something I’m doing wrong but about 1/3 of the time when I scan a book, it runs the Create Row block section of code but nothing new appears in the Google Sheet. A similar process using Firebase “just works.”

I also worry that when I have several family members using the app simultaneously, there might be conflicts in Google Sheets whereby the wrong row gets updated. The nice thing about Firebase is that if I add a new node, it doesn’t affect other nodes that has already been added.

A local data source would be faster and easier but I want my family members to be able to access the data from their computers in a user-friendly format.

I could see this happening for two reasons (probably not the only potential reasons) but I can’t really tell from here. I’ve seen the calls fail if any of the values is null. Otherwise it could be rate limiting which I highly doubt (but is possible)

A local data source would be faster and easier but I want my family members to be able to access the data from their computers in a user-friendly format.

Perhaps using a front end nocode builder would be a good use case here. Perhaps could even be free

Why not use a Thunkable project for the online/on computer portion? (Serious inquiry)

I’ve seen the calls fail if any of the values is null.

Yes, I think that’s what’s happening. I had a hunch but I haven’t thoroughly debugged that section yet.

Why not use a Thunkable project for the online/on computer portion? (Serious inquiry)

A web app? Yeah, I may go that route.

I’ll claim ignorance on those three but I may have a few questions for you later. I appreciate the advice you’ve given me!